My story from the great adventure. 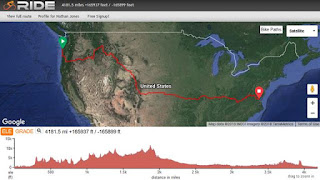 After a miserable summer in 2017 when I was forced to stay off my bike due to asthma problems, it was absolutely time for a new bike adventure in 2018.

But which one to choose? Interest in long-distance bicycling and the number of bicycling adventure races had grown a lot since 2012 when I did  the Race Across America (RAAM). I had applied to start in TCR (Transcontinental Race) a 4,000 km race in Europe back in 2016, but had not been successful in the lottery for a place at the starting line. I hadn't stayed away from cycling completely since RAAM. In 2014 I had biked a grueling mountain bike race Transalp and the year after I completed my fifth Paris Brest Paris, and had done a few long distance challenges in Sweden as well. I have averaged about 15,000 km a year for the last years. Most of my biking has been done commuting to work or with my wife on our tandem.

I decided on TABR in late fall of 2017. The 6,800-kilometer race was the world's longest race at the time which both appealed to me and scared me. I also thought it would be interesting to cross the American continent again. This time solo without a crew in a chase car. I sent in my application and started to read stories from riders who had done the race in previous years. It was going to be the sixth edition of the race so there were quite a few stories to read and learn from.

After New Year's I started training and in addition to my 30-kilometer bike commute I did a lot of riding in the garage on my smart trainer, logged in to Zwift. I was quite new to zwifting and I found it to be a great way to get in shape during the cold and snowy Swedish winter. I increased my weekly distance for every week that passed, but it was by no means any scientific training program. More like, do the ride you feel like every day and keep it fun and simple. I usually did one longer ride once a week. The longer ride was between 100 to 200 kilometers and it was a good way to prepare both physically and mentally for the long days to come in the saddle, working out for hours on the trainer in the garage.

By early March I was biking a little over 400 kilometers a week with a combination of commuting and zwifting. Then I got the flu and was forced to stay off the bike for a couple of weeks. When I felt well enough to get back in training I noticed that I had developed the same kind of asthma problems that had kept me off the bike the summer before. I could ride at a very easy pace, but it was impossible to do any actual training.

The weeks went on and I made numerous visits to my doctor without getting any better. Finally in early May I got the medicine that seemed to help and I could slowly get back in training again.
The start of TABR was on June 2, and I knew there was really no way I would have a chance to get even close to being prepared for the race in those few weeks.
I just couldn't decide what to do. One day I made up my mind to go for it and the next day I would regret it and decide not to go. It's really a wonder that my wife Alice didn't kick me out of the house the way I went on.

On May 15 I finally booked the flight to Portland, Oregon.  I decided to go for it and to do the race not racing but more like fast touring at my own pace. Alice drove me and my gear to the airport in Stockholm in the early morning of May 28. The great adventure had begun. 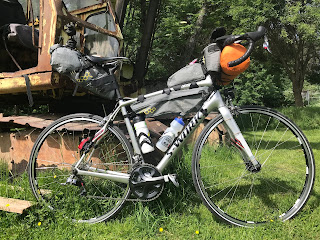